One of the biggest challenges for players is the concept of bow arm weight in relation to sound production.  And with that comes the challenge of feeling a sense of balance in the hand as that weight is transferred from the back/arm to the hand/bow/instrument.  So many players begin to play by bringing the bow just up to the string then hoping to produce a nice round sound. But approaching the string essentially from ‘coming from under’ this way actually makes about as much sense as asking someone to jump in the air without first bending the knees for ‘spring’.

In fact, to better understand this movement concept, the player can try it in their practice room.  First jump in the air without any restrictions, doing whatever comes ‘naturally’ to do so. Seems simple, yes?  This time jump in the air but do not allow the  knees to bend in the process. Amazing how awkward jumping feels when we have no spring and no momentum! 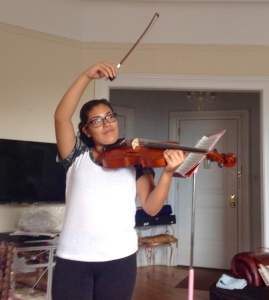 Same is true when it comes to sound production and getting the weight into the string. By doing what is most common, namely bringing the bow up to the string and hoping for the best, the player is basically limited to pressing the bow into the string using pressure and force.  It’s like jumping in the air without bending the knees to prepare for lift off. This can certainly become tiring as well!

While one would never dream of asking students to make huge arm circles in a performance I would ask them to make huge arm circles in the confines of a lesson or practice room to become acquainted with range of movement that is possible to utilize. The body has a wonderful way of accessing those physical memories at the crucial moment through kinesthetic learning. Keeping in mind that under most stressful performance situations many players tend to shut down a bit physically. That is one reason its a good idea to exaggerate certain movements from time to time in a practice room so that when the player is in a pressure situation, they will be less afraid to move enough. 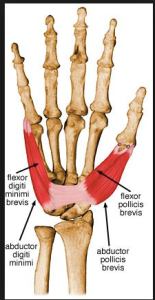 Close up of Digiti Dorsi

They say that ‘what goes up must come down‘ and thanks to gravity that is most certainly true. Therefore the issue is to elevate the arm sufficiently so it can eventually come down onto the string. Exaggerating the range of motion will become of feeling the body can access and eventually modify/polish to the point where it may not be obvious at all that the arm is actually circling around for a landing on the string.

Karen Tuttle was always a huge proponent of open strings as a way of training the body to utilize arm weight to produce the sound. it was sometimes disconcerting because once the player accesses that weight, there is a temptation to hold back because no one wants to crash down on the string and make an ugly sound. And while the last thing I’m suggesting is that anyone do harm to their valuable instruments, try not to be too afraid of ‘ugly sounds’ as the body learns to feel the weight and relaxed feeling of dropping the weight into the string. A combination of factors will perfect the sound over time, including bow speed, placement on the string in relation to the bridge and of course, the fingers of the bow hand learning to act as shock absorbers to that weight, effectively distributing and balancing the weight as the weight shifts from the pinky to the index finger.

Feeling the balance in the right hand as the weight hits the string is a big stumbling block for many players. In particular utilizing 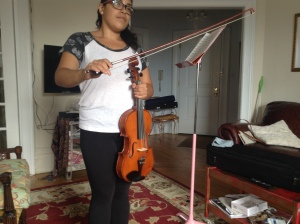 Rudimentary balance from the base of the pinky, noticing the shock absorber like quality in the pinky presents a challenge particularly with down bows, where the pinky takes up the brunt of the weight. (The opposite is true playing an up bow, especially from the tip, where the weight is palpably felting the index finger.)

the shock absorber like quality in the pinky presents a challenge particularly with down bows, where the pinky takes up the brunt of the weight. (The opposite is true playing an up bow, especially from the tip, where the weight is palpably felting the index finger.) 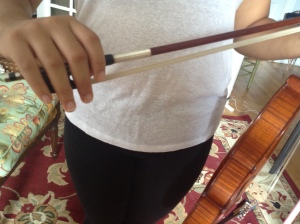